The term is scoffed at by astronomers, but it has come to mean the combination of a super moon – when the moon’s orbit is closest to the Earth and appears up to 8% bigger – and a full lunar eclipse, when the Earth’s shadow obscures the moon. On Sunday night it resulted in spectacular views of a coppery disc in the sky. “Blood moon” is not a scientific term. It began to be used in connection with Biblical prophesies, but has come to be used to describe the reddish hue seen on a super moon during a lunar eclipse. To astronomers, the event was a “super moon, harvest moon, tetrad, lunar eclipse”.

What is a lunar tetrad?

It is four successive total lunar eclipses, with no partial eclipses in between. 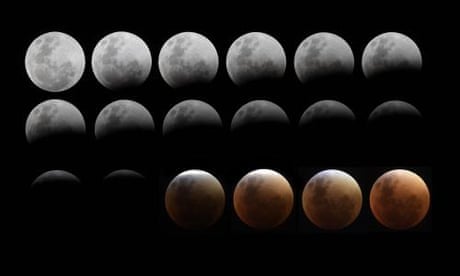 Why was the moon still visible during an eclipse?

During a total lunar eclipse, the Earth, sun and moon are almost exactly in line, with the moon on the opposite side of the Earth from the sun. As the moon was full when it moved into the shadow of the Earth it dimmed markedly, but remained visible because of the sunlight passing through the Earth’s atmosphere.

Why was it reddish?

The sunlight passing through the Earth’s atmosphere was filtered and refracted in such a way that the green to violet light on the spectrum was scattered more strongly than the red light. This left more red light to reach the moon’s surface.

When will the next “blood moon” appear?

The next lunar eclipse visible from the the UK is due in January 2019, but a lunar eclipse won’t coincide with a super moon again until 2033.

What is a harvest moon?

It is the full moon closest to the autumnal equinox on 23 September.