False Bay has one of the Cape Peninsula’s most tranquil and picturesque stretches of coastline. Known for its scenic beauty, it encompasses small seaside villages from Hangklip, near Pringle Bay, to Cape Point.

Popular with surfers, swimmers, bodyboarders and anyone who enjoys peace and quiet and the fresh sea air, towns along the False Bay coastline also offer a multitude of arts and craft shops, fantastic restaurants and bars, cute and quirky coffee shops, and quiet look-out points.

Whales abound on the False Bay coastline – every year between June and November, southern right whales migrate to the Western Cape waters to calve and nurse their newborns, while humpback whales journey through the region between May and December.

Thousands of local and international visitors flock to False Bay to experience these amazing whale-watching opportunities, where the creatures are often seen metres from the shore.

In addition to sun and sea worshipping, there are numerous activities and attractions in the area for visitors to enjoy. Nature reserves, including Cape of Good Hope,Rondevlei and Silvermine, offer the opportunity of walking among the rich biodiversity of the Cape Peninsula, which includes indigenous fynbos.

Other ways to relax along the False Bay coastline, while enjoying the stunning scenery, are playing a round or two of golf at either the Westlake, Clovelly orSimon’s Town golf courses, sampling a few wines along the Cape Point Wine Route, or sharing Boulders Beach with its local inhabitants, the African penguins. 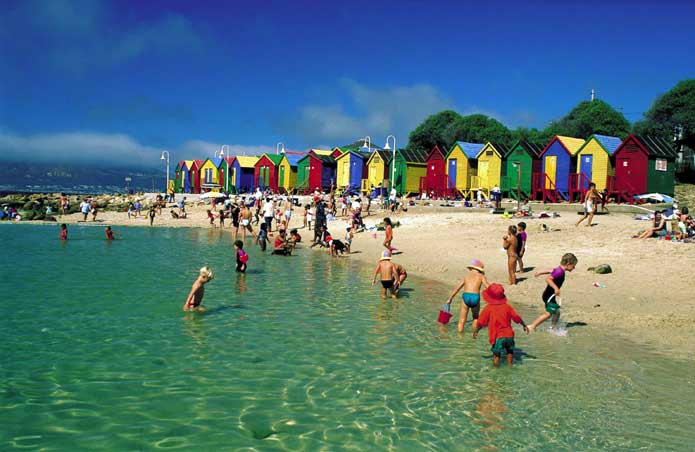 Some of the most popular small towns along the False Bay coastline include the historical naval village of Simon’s Town, Muizenberg (known for its epic waves),St James (with its colourful huts), Kalk Bay (with great seafood restaurants) and Fish Hoek (with one of the best beaches).