Conversation about Africa’s Big Five centers on the 5 most iconic species of the continent: lion, leopard, rhino, elephant and buffalo. But did you know that the vast ocean surrounding the southern tip of Africa is home to its own flagship species?

The Marine Big Five are the whale, shark, seal, penguin and dolphin. South Africa offers exceptional oportunities to view these animals all across the Western Cape Province from the Garden Route to Cape Town itself. These are the most popular sea animals of Southern Africa and ticking all five off your list is a must-do for any holiday to this beautiful country. 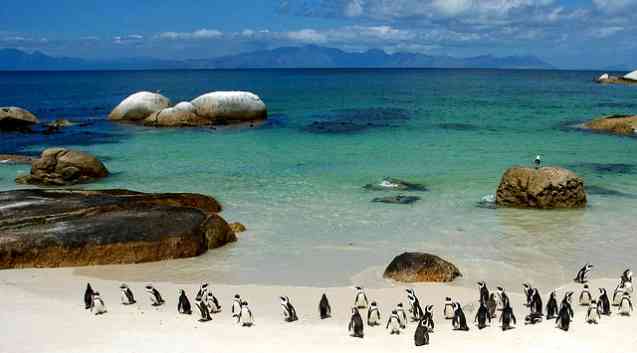 This diminutive creature, dapper in black and white plumage, has recovered from the brink of extinction. There are a few well established colonies dotted around the Western Cape of South Africa; Dassen Island, St Croix Island, Robben Island, Bird Island, Dyer Island and Boulders beach.

While St. Croix Island in Algoa Bay boasts the largest population in the world, and Robben Island is perhaps the most famous habitat for these birds, Boulders Beach is undoubtably the most memorable. 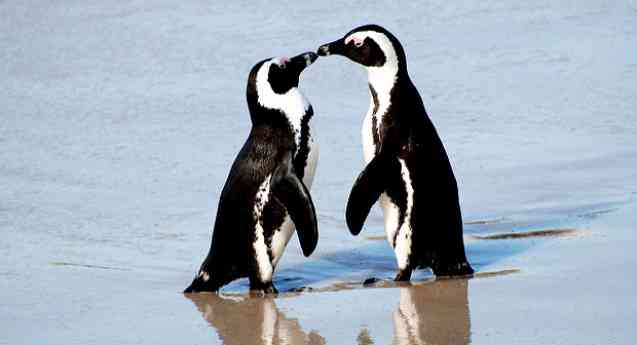 The penguin colony at Boulders Beach boasts almost 3000 birds so, whether walking the board walk or heading down to the beach, you are guaranteed sightings year round. Located in Simon’s Town roughly 45 minutes’ drive from Cape Town, Boulders has been rated as one of Lonely Planet’s Top 10 Unique Beaches.

In addition to the spectacular views across False Bay, visitors to this sheltered cove can not only get close to the penguins but actually swim with them! And if this kind of close encounter with the avian kind leaves you hankering after a more intimate experience, Sanccob, a penguin rehabilitation centre in Simon’s Town, offers private tours and voluntourism opportunities.

The Cape Fur Seal, famous for its soft brown fur, can be seen from Namibia, all the way down the west coast and past Cape Town as far as Port Elizabeth. In Cape Town they are a real tourist attraction at Hout Bay and Kalk Bay harbours and get a fair bit of attention at the V&A Waterfront too.

There is something comical about these lugubrious looking sea giants, sunning themselves and flumping about on their clown-shoe flippers. But its as they plop off dry-land and into the water that you get a sense of the playfulness, agility and speed of these aquatic mammals. 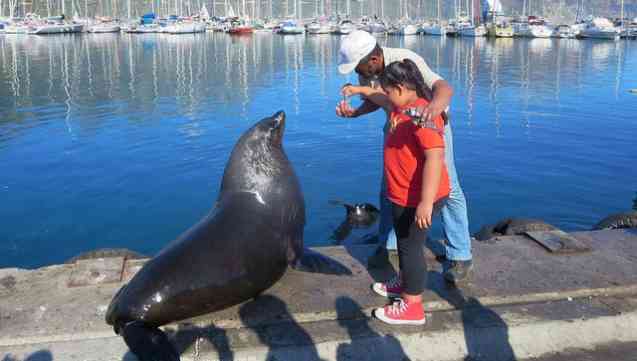 With this in mind I was thrilled to learn that you can actually go snorkelling with seals. Diving with Seals happens on the Atlantic side of Cape Town at Duiker Island in the Karbonkelberg marine protected area (part of Table Mountain National Park). The cooler waters of the Atlantic, shallow kelp forests and comparatively low number of seals (only 5000) mean that this is the perfect spot to interact with these wild animals.

While cautious on land, seals are famous for their curiosity under water.  They are known to approach humans and even swim alongside scuba divers. The trip from Hout bay is short and easy and the area, i am assured, is shark free! What better way to get to know these aquatic acrobats? 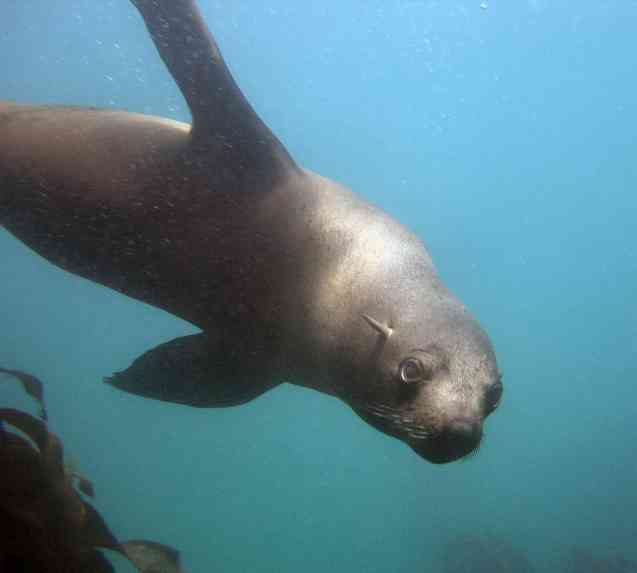 If you’d rather not get into the water with the seals there are boat trips to many of the seal colonies dotted along the coast. Gansbaai is popular as a hub for all marine viewing and Geyser rock adjacent to shark alley is home to roughly 60,000 Cape fur seals. If that is a little small for you then you need to head for Kleinzee on the West Coast. Just north of Kleinzee is the largest on-land seal colony in South Africa boasting over 350 000 seals!

Dolphins are synonymous with the ocean space and no trip is complete without at least one dolphin sighting. Luckily with the rich marine biodiversity along South Africa’s coastline you are sure to tick this one off your list fairly quickly! These aquatic mammals can be seen in both the Indian and Atlantic oceans, jumping in and out of the surf or on a specialist dolphin tour.

While South Africa is home to over ten dolphin species, the ones that you are likely to see swimming close to shore are the famous Bottlenose Dolphin, the Long-Beaked Common Dolphin and the shy Indo-Pacific Humpback Dolphin.

No other marine mamal inspires as much excitment and joy as they cavort through the water. The sardine run, which takes place between May and July, is a great time to see dolphins as they gather en mass to take advantage of the abundance of food. You can see pods of dolphins working together to herd the sardines into a “baitball”, which they push to surface and then feed on, a lot like sheep dogs herding sheep.

A less season specific option is to take a trip out to Plettenberg Bay on the Garden Route. Plettenberg Bay has plenty of land-based viewing options but also opportunities to get really close by taking a boat cruise or, for those feeling a little more adventurous, a kayak tour into the big blue.

South Africa has some of the best regulations controlling interactions with sealife and because human interactions adversely affect them, swimming with dolphins is strictly firbidden. 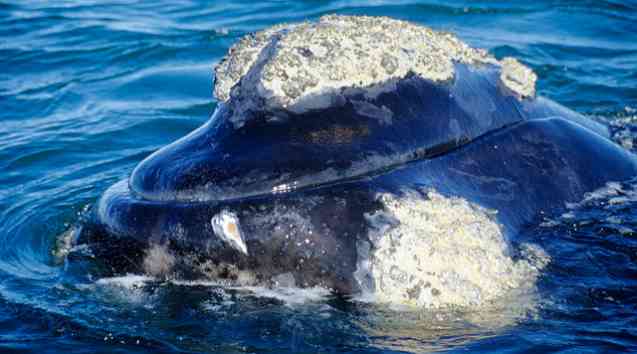 At 16 meters in length, the shear size of these ocean giants is enough to drop anyones jaw. All along South Africa’s Western Cape coastline, between June and December,  whales can be seen as they move into the warmer  shallow waters to calve. The Whale Route includes various bays along the Garden Route and stretches from Cape Town to Cape Agulhas.

Sheltered bays like False bay and Hermanus are nurseries to the endangered Southern Right and Humpback Whales who can be seen playing, often a stones throw away from the shore.

Southern Right whales, so named because they were considered to be the “right’ whales to hunt, migrate up from the cold waters of the antarctic to the warmer conditions of South Africa’s beautiful coastline. Here they can be seen playing just off shore, nurturing their young, waving their fins or bobbing their tails and, if you are lucky, you migt even get to see one of these 60 ton giants breaching out of the water to make a tremendous splash. 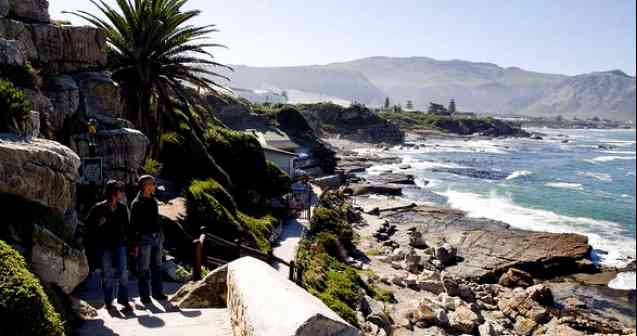 Just over an hour and a half from Cape Town is the coastal town of Hermanus. It is one of the best places in the world for land based whale watching and boasts over 12km of cliff path walking where in places, whales can be seen from only a few meters away.

Hermanus is also host to the now famous Whale Crier, who announces the arrival of whales in the bay by blowing on his kelp horn. Considering that these gentle giants were once hunted to the brink of extinction it is a marvel to see them flourishing.

Top of the marine foodchain the Great White Shark unquestionably holds the number 1 spot. The largest fish species on earth, adult sharks reach between 4.5 and 6 meters in length, weigh about 2 and a half tons and can swim at almost 25km and hour … did I mention the several rows of ever regenerating serrated teeth?

The combination of speed, agility and raw power of the Great White make it a fearsome and feared predator AND a hot favourite for any sea safari.

Seeing the apex predator of the marine kingdom up close is without a doubt one of the most thrilling and humbling animal encounters on the planet. The Western Cape is one of the best places to see Great White Sharks at daringly close range, with hotspots including Seal Island in Mossel Bay, Dyer Island and Geyser Rock near Gansbaai, and the infamous Seal Island in False Bay, which is home to the “flying” Great White Sharks.

With impeccable ‘safety first’ regulations it is now more accesible than ever to get below the surface and into the sharks natural environment.

Listed as vulnerable on the IUCN red list very little is known about these predators. Public opinion towards sharks is changing and companies like Marine Dynamics, operating out of Gaansbaai, run eco-tourism oportunities where conservation is at the heart of all activities. This means that your adrenaline pumping experience with the Great White contributes directly to the science of keeping them sfae and protecting white shark populations.